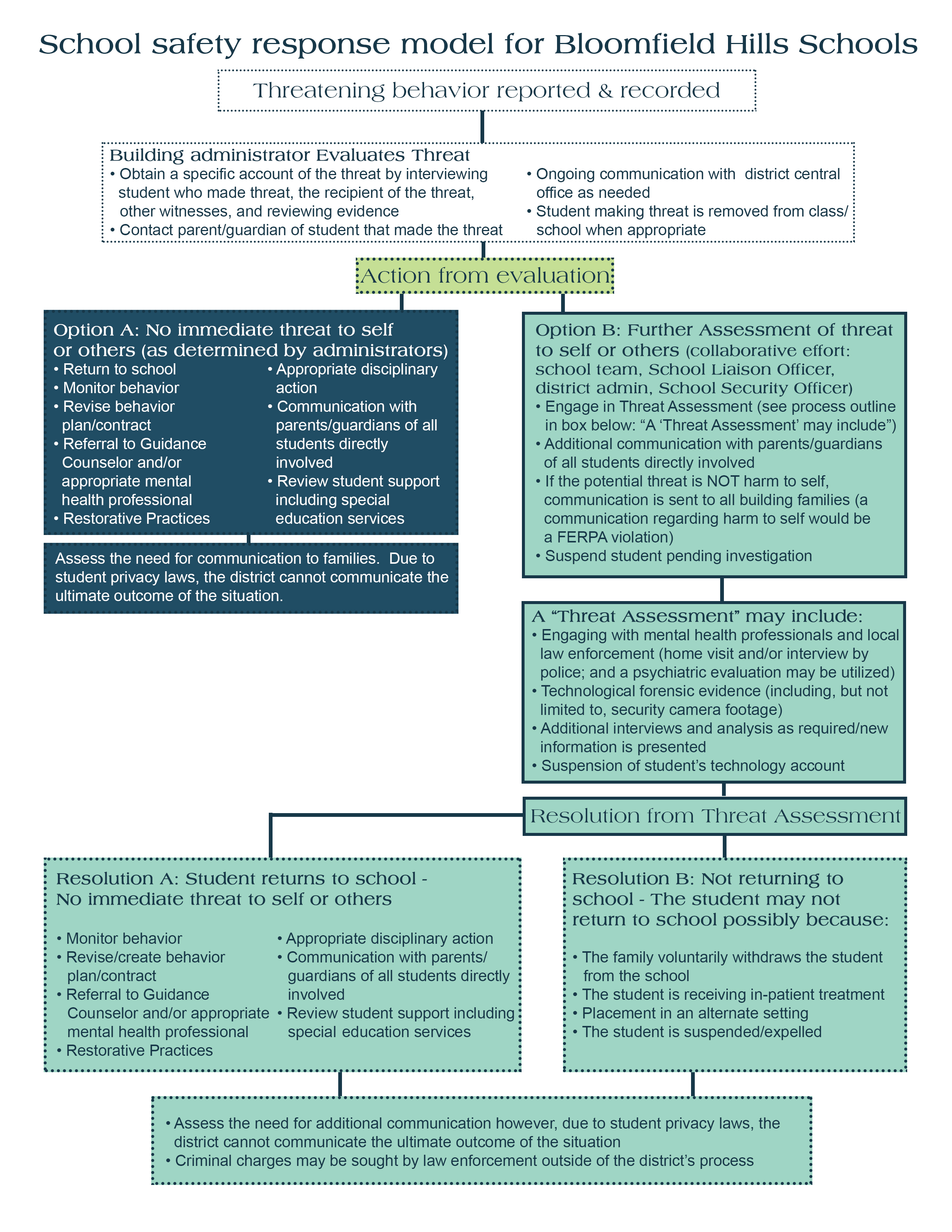 The School Resource Officer (SRO) is a Bloomfield Township Police Officer who works closely with all schools in the district to support day-to-day safety issues/concerns. They may also be called a "School Liaison Officer" (SLO). Often, the SRO/SLO is called quite early in the evaluation phase because the SRO/SLO can work closely with building leadership to make quick decisions for the safety of all students.

FERPA is a Federal law that is administered by the Family Policy Compliance Office (Office) in the U.S. Department of Education (Department). 20 U.S.C. § 1232g; 34 CFR Part 99. FERPA applies to all educational agencies and institutions (e.g., schools) that receive funding under any program administered by the Department. Parochial and private schools at the elementary and secondary levels generally do not receive such funding and are, therefore, not subject to FERPA. Private postsecondary schools, however, generally do receive such funding and are subject to FERPA.

The Uniform Code of Student Conduct covers all matters related to suspension and the options the district has for discipline related to threats.

The Code of Conduct states: "A student in grades six or above, who makes a bomb threat or a similar threat directed at a school building, other school property or a school-related event, will be suspended from Bloomfield Hills Schools for a period of time as determined in the discretion of the board of education or its designee."

To read the full Code of Conduct, please visit:

A Behavior Plan and/or Contract may be utilized:

Behavior Plans assist the student, school, and family by increasing support for the student, providing a path for success, and reinforcing positive behavior. The plan also helps teachers address specific student challenges and closely monitor the progress of the student.

Behavior Plans and Contracts may be used for students with and without an IEP.

School counselors are not psychiatrists and do not prescribe medication. They may, however, offer suggested external supports for students and families in need. If you believe your child would benefit from meeting with the school counselor, please talk to your child's teacher or principal.

School staff are well educated on the variety of external supports available to students and their families. No matter the need, our staff can help connect families with valuable resources to support them through a variety of challenges. The following are just some community resources we suggest:

Restorative Practices is a new field of study that has the potential to positively influence human behavior and strengthen civil society around the world.

To learn more about Restorative Practices, please take a few moments to watch the video below.

...Walton says there are many reasons students make threats against a school. One of the most common is that they just thought it was funny.

“That’s always the defense: ‘I was just joking,’” Walton said.

Even if the student or students had neither the intention or the means to carry out a threat of violence, there are still serious consequences.

Police departments and school officials have to spend time investigating every threat. They often have to put the school on lockdown. They have to expend resources to determine whether the threat was credible and who made it.

Kids who make threats against schools are most commonly charged with making a terrorist threat, a felony punishable by up to 20 years in prison.

Children under 17 who have been charged with making a terrorist threat would most likely go through the county’s Juvenile Court. As juveniles, they could be held only until age 19.

Juveniles aren’t usually charged as adults unless they are accused of a crime involving violence, such as murder, Walton said.

“The tone of the conversation has changed,” Walton said.

Even if nothing changes in the judicial system, kids as young as 13 are still jeopardizing their futures by making school threats.

Colleges and employers will not be eager to welcome someone who has that history, he said.