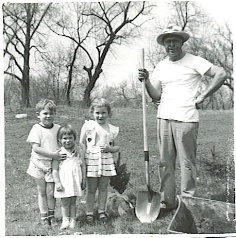 More than thirteen thousand years ago, a melting glacier left behind massive piles of sand and gravel that formed the "hills" of Bloomfield, and shaped the original landscape of the area now known as the E. L. Johnson Nature Center. Melt waters created the small tributary of the Rouge River that crosses the property, as well as the low depression that later became an inland pond. A variety of plants and animals inhabited the property over the ensuing years, mainly influenced by the warming climate. There is no evidence of human activity on the property prior to settlement days in the early 1800's, but it is known that natives often traveled in the area, and they very likely fished in the surrounding lakes.

The first settlers came to the Bloomfield area about 1820. They were seeking good grazing land for their livestock, and space in which they could plant fruit trees. The area was attractive to them because it contained high ground that was relatively free of trees...open land that would not have to be cleared of unwanted trees and stumps. It was described in terms such as "oak openings," "oak barrens," or "savanna," which are habitats that only contain a few trees per acre and are dominated by tall grasses and perennial flowers. Thus the name "Bloomfield Hills" was derived from the blooming fields located on the surrounding hills. The plentiful lakes of the area were undoubtedly an added attraction to settlers.

George and Mary Pearsall were the first recorded settlers of the property on which the Nature Center sits today. They purchased 80 acres of land from the United States government in 1830 at a price of $2 an acre. In 1859 the Williamson family acquired the property, and doubled the size of its holdings by purchasing an additional 80 acres on the west side of Franklin Road. The Williamsons lived there for nearly fifty years, and their farming lifestyle had a great impact on the land. They built a large two-story brick home, a barn, and several outbuildings, and grazed folds of more than 100 sheep for many years. There were likely very few trees at that time, except for a few planted near the house. The sheep would have devoured any of the remaining original vegetation, so it is logical to assume the flora changed dramatically from pre-settlement days. In the late 1800's, many apple trees were planted in the central areas of the property; most of the trees are still there today!

The Williamsons sold the farm in 1908. The owner of the property, Colonel Waldon, a wealthy man who built and inhabited the Pine Knob mansion in Clarkston, allowed the farm to lay fallow for nearly 40 years, during which the house and various farm buildings burned or were destroyed. A sugarbush was either planted or, more likely, established itself, in the 1920's. A new, four-lane "super highway" named Telegraph Road was built in the 1930's, and it divided the original farm from north to south. Occasional grass fires prevented brush from taking hold throughout the property. Photographs from the late 1940's reveal an open landscape with just a few scattered trees, the apple trees and sugar bush growing well, and vegetation composed primarily of alien weed species that became established after the farming days. The land was sold to developers and subdivided in the 1940's.

Shortly after the conclusion of World War II, the parcels of land along Franklin Road were sold. Richard and Carol Olsen purchased 16 acres, and built the home that now serves as the caretaker residence at the Nature Center. The Olsens dredged the low, swampy area east of their home. It eventually filled with water from natural underground springs, and formed the pond that today's visitors enjoy. In the twenty years that the Olsens lived in their home, they created their own natural sanctuary by planting thousands of trees, shrubs, and wildflowers. They planted not only native species, but experimented with species from other areas of the country as well. They introduced fish into the pond, and kept detailed records of the wildlife they observed on the property. The Olsens sold their beautiful property to the Bloomfield Hills School District in 1968.

The thriving and growing school district purchased additional acreage adjacent to the Olsen property, creating a thirty-nine acre site to be used as a nature center to enhance the teaching of science. It was dedicated in 1970, and Don Hollums was hired as Manager to oversee the maintenance of the property and direct the educational program. Photographs from that period depict extensive tree plantations on the south half of the property and the old apple orchard to the north. Because the grass fires were suppressed, some trees grew along the stream, and scattered clumps of shrubs burgeoned. Don added several species of trees during the 20 years he served as manager, and native wildflowers were planted in various places as well. In 1975, two, old, previously used, portable buildings were settled on the property to be used as temporary classrooms.

After Telegraph Road was widened in 1977, a great many trees were planted in an effort to somewhat screen the Nature Center from the highway. When the District decided that a grand way to enhance Michigan studies for students would be to purchase, relocate, and restore a log cabin of the early nineteenth century era, the availability of land at the Nature Center made it a logical destination site. The search for an existing cabin of that time period yielded no results, so 1985 recreation millage funds were used to build a facsimile. It was completed in 1987, and the cabin was furnished appropriately to represent the late1800's time period. Today, students as well as adult visitors delight in the opportunity to enter the cabin and instantly step more than a hundred years backward in time!

There was no cutting or removal of vegetation on the land during all this time, and plant succession was allowed to proceed in a natural fashion. This resulted in buckthorn becoming so dominant that it prevented normal plant succession to occur. Over time, areas became so choked with buckthorn that it was almost impossible to walk upright through the area! Ground flora, such as wildflowers and grasses, could not grow under the buckthorn. This dominance of one plant species greatly influenced the variety of wildlife on the property. Many of the formerly open areas were quite overgrown and wildlife that preferred open fields simply disappeared. Dan Badgley, who succeeded Don Hollums as Manager in1989, instituted a program in 1998 to remove the omnipresent buckthorn, and replant native species. Several areas have been cleared and replaced with prairie meadow species, yet the work continues, especially in the woodland areas. Native wildflowers are being transplanted, and under story shrubs and trees. Species lists are being recorded and studied, and it is hoped these efforts will encourage a more diverse wildlife inventory to emerge.